With 14 schools participating in the voting and over 7,000 votes cast in total, the winners for the Red Dot Book Awards in Singapore as a whole are:

The voting results for individual schools were tallied in a Google Doc and the link was sent to those librarians involved.  If you didn’t get an email from me and you had students who voted, drop me a line (kda@uwcsea.edu.sg).

The Readers Cup competition will be held on May 10, 2012, at UWCSEA East (Tampines campus).

Titles (a subset of the shortlists for Younger, Older, and Mature readers) for the Readers Cup event will be announced within the next few days (as we know you’re all anxious to start working).

What about next year’s Red Dot shortlists?  Well, we’ve already set up Goodreads Listopia lists to collect suggestions.  And our goal is to collect and consider these long lists by June — and announce the shortlists BEFORE the June/July break.  So you can be reading over the summer.

NB:  To put a book on the suggestion list, you do have to have a Goodreads account.

Click below to access each of the lists — and add whatever books you want.  I’ve populated the lists — to start with — with books from the Panda Book Awards (the China equivalent of the Red Dot awards) and the Sakura Medal (the Japanese equivalent).  Books should have been published in English in 2009, 2010, 2011, or 2012. 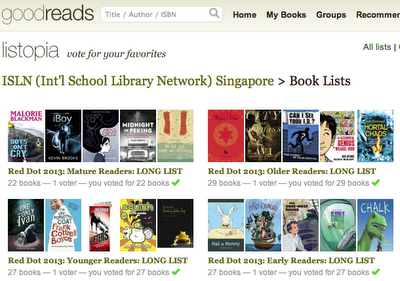 Anyone interested in being on the Red Dot subcommittee — i.e., the people who will look at the longlists and pick 8 per category, looking for a balance of type, national bias/source, etc. — just drop me a line (kda@uwcsea.edu.sg).